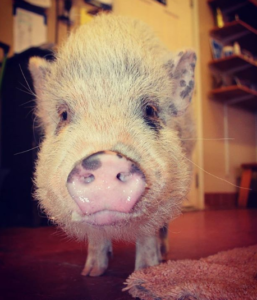 Like any animal, pigs are more at risk of some issues than others. If you have one in your home, it’s important to recognize the most common pig diseases, and know when and how to get treatment. As always, an article on the internet is not a reasonable substitute for your veterinarian’s advice. When in doubt, call! 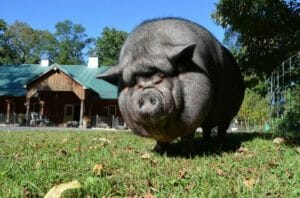 Obesity is probably the main issue we see in pigs, and it’s never the pig’s fault. The is one of the few human-caused pig ailments that we can fix. Pigs are programmed to eat. They love it. They think it’s wonderful. And it is the owner’s responsibility to limit their pig’s intake of calories so they can be healthy. If your pig is obese, then it becomes your responsibility to help them lose weight.

Pigs gain weight really easily, and they lose it slowly. That can make weight maintenance harder than new owners expect. The best rule of thumb is always to set up and maintain healthy eating habits. Just because your pig is young doesn’t mean they should eat a ton. Even a 6-month-old piglet can get fat.

Obesity isn’t healthy for any animal, including pigs. It can lead to a variety of other issues, including arthritis, heart issues, hearing loss, and fat blindness. Obese pigs will die younger, sometimes even before they reach 10 years old! 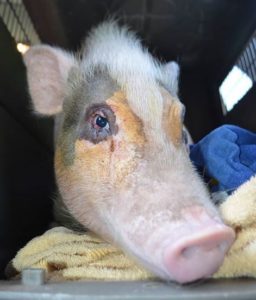 Entropion is a condition where the eyelashes turn inward and scrape against the eye. It can be genetic or caused by excess weight gain. Usually, if a young piglet has entropion and is at a healthy weight, it’s genetic and you should keep an eye on the rest of the litter. Sometimes entropion can develop in older piglets as well, so it’s important to keep an eye out for it.

Obesity is another cause of entropion. If a pig gains too much weight, it can cause the fat folds on their head to slide over their eyes, causing fat blindness. Depending on how the fat falls, it can also cause the pig’s eyes to squint and their eyelashes to push up against their eyes.

In either case, the only way to correct entropion is surgery. However, if it is caused by fat blindness, then the pig will have to lose weight first so that they can have surgery safely. Just one more reason to keep your pig healthy so they can have the best life possible!

Dippity pig is a frightening thing to see happen to your pig. Trust me, they don’t like it either! It’s basically shingles for pigs. That’s why it can sometimes look like they have a severe sunburn on their back. It’s quite painful and unfortunately, there is no real cure. 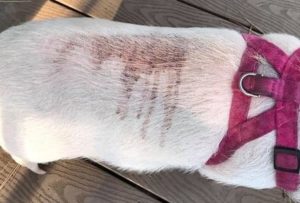 Dippity pig is characterized by a red, inflamed area and lesions on their back. You may also see your pigs’ hind legs collapse when they are standing or walking. The lesions may ooze a thin, red fluid and be painful to touch. These lesions usually occur horizontally across the back, from side to side. The pig will usually still eat and drink, but it may try to run away from the pain and will not want to be touched.

For owners, dippity pig is one of the scariest pig ailments you may ever see. It comes on suddenly, is often found in young pigs, and can be debilitating for the duration. It’s usually pretty short-lived, often lasting only 24 – 72 hours. It can be a pretty nerve-wracking time though! The best thing you can do is make sure your pig has a quiet, dark area to rest. Time is the best cure for this disease.

All animals, including humans, are at risk of salt toxicity. It’s considered one of the common pig ailments because pigs don’t drink water like many other animals. Their bodies are also not particularly good at processing sodium. You won’t see a pig go over to their bowl and lap up water as often as a dog does. Their bodies can’t handle salt as effectively as others.

If your pig gets access to salt, it is a medical emergency and you need to get to the vet immediately. Do NOT give the pig water. Salt causes the pig to retain water, just like it does in people. At a cellular level, the sodium increases and bonds strongly to the water molecules. If you give your pig water after they get into salt, the cellular walls can actually burst. If the condition is severe, this may lead to death.

Although the acute form of salt toxicity is sudden and frightening, you may also see an extended version of it. This is usually due to a lack of hydration. If a pig overturns their water bowl or won’t drink from their bowl if it’s dirty or simply don’t have constant access to clean, fresh water, they can also get sick.

Symptoms of salt toxicity include:

If you ever have reason to believe your pig has salt poisoning, call your vet immediately. It is a life-threatening emergency.

Urinary tract infections are possible in all species as well, but because pigs don’t drink as much, they can be more prone to them. It’s another common pet pig ailments that you should know how to spot because it usually means a trip to the vet. They are also more common in males than in females, due to how the urethra is shaped. Females have a straight shot out, while males urethra’s curve around. That curve is where deposits can collect and eventually lead to UTI’s.

You may also notice your pig urinating in strange places, inside, or even in their sleep. Some pigs might not have any symptoms at all. Those are the tricky ones. Eventually, the pig will either fight off the infection on their own with you none the wiser, or it may progress. If it does, it could eventually make it’s way to the bladder and/or kidneys and you will be at the vet. 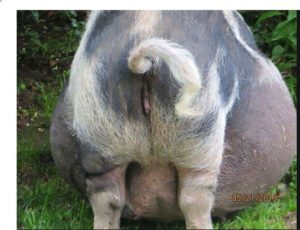 Female pigs need to be spayed. It prevents piglets of course, but it also curbs behavior issues and eliminates the risk of uterine tumors. Uterine tumors only occur in unspayed females. The older the pig is, the higher the risk of tumors. Of course, age also increases the risks associated with surgery. Most of the time, these tumors are not cancerous, but they can grow to enormous sizes. The size can cause other issues with the pigs and, if not treated, may eventually lead to death.

The only way to prevent uterine tumors is to spay your pig as soon as she is able to. Keep in mind that spaying a pig when it’s younger is also usually a cheaper option. Make sure you have found a local vet before you bring home a piglet!

This is far from an exhaustive list. There are many other pet pig ailments you should watch out for. These are only some of the ones we see or hear of most often.

Remember, no blog post, online article, or Facebook group should ever replace or substitute your veterinarian’s advice.