Pigs are very food-motivated creatures. Unlike dogs, they don’t view praise and attention as equal substitutes for food. Because of this, it’s easy to use food to get your pig to do things, and that can lead to an obese pet pig.

If you need to get your pig into your car, many people will lay treats up a ramp. Like magic, the pig walks up, eating as he goes. This encourages owners to continue using food to get their pig to cooperate. Treats to go outside, treats to come in, treats for hoof trims, treats for harness training. Then pigs get used to getting treats all the time. Then they start to expect them and start getting an attitude when they aren’t offered.

This is your pig training YOU, not you training the pig.

Part of the problem is that it’s very easy for pigs to become obese, and it’s hard for them to lose weight. As the owner of the pig, it is your responsibility to keep your pig healthy and happy. Once you have an obese pet pig, you have to work on breaking bad habits. It’s much easier to simply maintain good habits from the start.

There’s another reason pet pigs become overweight: their environment. Pigs need daily exercise. They’re smarter than dogs, so they need a stimulating, exciting environment that presents challenges for them to overcome. That’s hard to provide if you’re living in an apartment in the sky.

Sometimes this happens because people are misinformed about how big their pigs will grow. But if you get a pet pig and you’ve done your research and spoken with your vet, you know that the pig will not stay small enough for you to carry up and down the stairs.

If your pig becomes house-bound because they get too big to get in and out of the house, they lose the ability to help regulate their metabolism. Then the food they’re getting transforms straight into fat. When that’s added to a regular overfeeding that involves a lot of treats, you have the recipe for obesity.

Should Pet Pigs be Fat?

We’ve always seen pigs with big round bellies and cheeks, so we think that’s the image of a healthy pig. It’s not. A healthy pig should be slim. You don’t want to be able to see their ribs, but you should be able to feel them. Their faces shouldn’t be swallowed in round, fat cheeks and jowls.

It’s incredibly unhealthy for pigs to be overweight or obese. Just like people, it causes a variety of physical and mental issues. The mental issues can then make recovery more difficult. Overweight and obese pet pigs often seem to be depressed. They don’t want to engage with people, even in safe, familiar areas. They want to eat, sleep, poop and then be left alone.

This can be complicated by something called mechanical blindness. Also known as “fat blindness,” this is when the pig gains so much weight that the fat on their face actually rolls over their eyes. When a pig is this fat, they can also experience hearing loss. The fat occludes their ears as well as their eyes, pushing them forward and down. Then owners become concerned because their once-friendly pig is now aggressive. 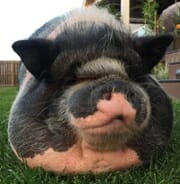 The pig has become disabled. They can’t see or hear properly, so they’re scared of everything. The excess weight can also cause their tendons to become deformed and makes routine vet care incredibly difficult. Obese pigs will live short, unhappy, unhealthy lives.

If you’re not sure if your pig is overweight, there are a few ways to tell. Pet pigs come in a variety of sizes, so you can’t always tell by weight alone. Most pet pigs are not likely to weigh more than 175 pounds, but if they are mixed with farm swine, they may be bigger.

One of the easiest ways to tell is just by looking. If your pig’s belly drags on the ground, the tail is sunken deep into their rear, their face has large jowls, their eyes are covered by fat rolls, their ears are pushed forward and down by fat, the pig is obese. 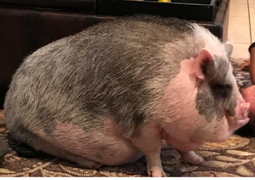 Once you know if your pig needs to lose weight, start working on it. There are two main parts to this: diet and exercise. Just like people! A very obese pet pig will not want to move much, but they have to in order to lose weight. Here at Ross Mill Farm, we’ve used a variety of tactics to encourage movement.

These are just a few ideas, and they won’t work for everyone. If this is your only pig, then you might need to work with your vet to see if there are other areas you could bring your pig to help encourage them to move and walk around.

If your pig is harness trained, you can also help them exercise by taking them on short walks. This may need to wait until later in the program if they are morbidly obese. Most importantly, consult with your veterinarian.  They can help guide you on the specifics of what your pig is physically able to do.

Along with exercise, they need less food. Here at Ross Mill Farm, Susan Magidson works with vets to determine a plan of action. You should consult with your pig-friendly vet before starting a diet, but it may be similar to this:

Step One: NO TREATS. No vegetables, no fruit, no grains. Only pig food, and any medications that are necessary.

Step Two: Gradually decrease the amount of pig food given each day. We use Champion’s Potbellied Pig Pellets because it’s high in fiber and has everything a pig needs to be healthy. Many pigs will need to be taken down to only getting 1/2 cup of food, two times per day. This is ONLY during the diet. Once they have reached a healthier weight and have increased their activity, you’ll need to start increasing their food intake again.

The idea is to balance the amount of food they’re getting with their exercise. If an obese pig can only stand briefly, they don’t need as much food as a pig who can wander around.

Step 3: Get them moving! Do what you need to get those bellies up and moving. This is going to be difficult at first. An obese pet pig won’t like it. They’ll be mad at you and they might throw some tantrums. Do it anyway. Susan had great luck with one of her pigs, Spike. She put some piglets in with him and they annoyed him into moving around more. Once he started moving, he kept going.

As you diet your pig, you also need to make sure they’re getting enough water. Sometimes Gatorade or juice can be mixed with their water, but make sure it’s mostly water. It should be just enough to entice the pig to get up. 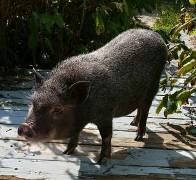 This is likely to be a long journey that you’re embarking on with your pig. It may take 9-12 months for your pig to reach a healthy weight. As you progress, you’ll see your pig change back into a happier, healthier, friendlier pig. For all the work it takes, it’s worth it.