Ross Mill Farm, Inc. is a multi-functional working farm dedicated to the well-being of the Pet Pig as a household companion. The Farm provides services, products, information, education, and consultations.

Ross Mill Farm, Inc is also the primary Foster Care facility for Pig Placement Network (PPN) a non-profit organization that cares for potbellied pigs who are waiting to be adopted. The staff at Ross Mill Farm work closely with PPN to care for and find homes for the PPN foster pigs. 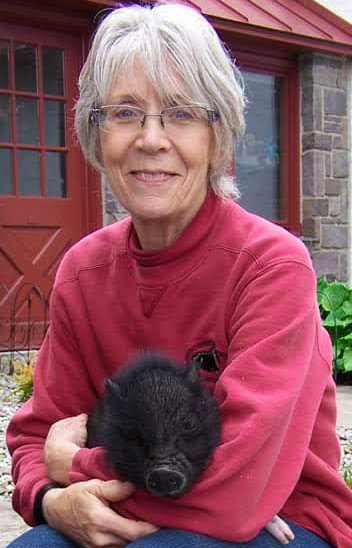 You can read more about Susan on her bio page here. 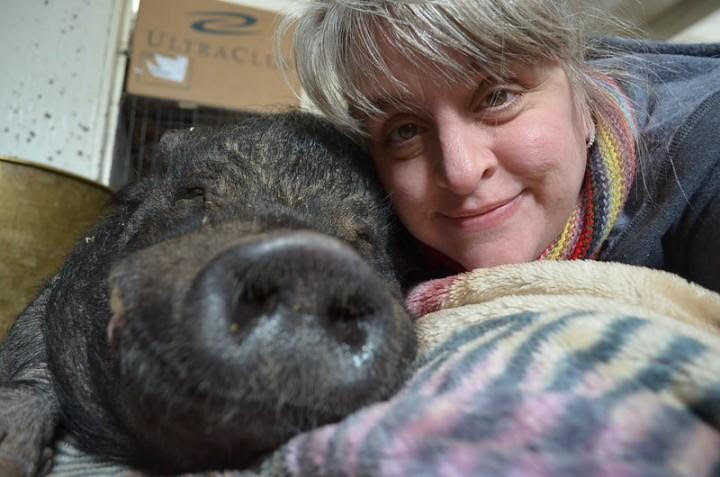 Jennifer has always had an eye for photography and loves taking photos of the pigs.  Prior to working at Ross Mill Farm, she lived in the Grand Canyon National Park while she worked as an x-ray technologist at the Park’s clinic.

In Fall 2002, Jen began volunteering at the farm and then became an employee two weeks later.  She’s been with us for over 20 years now.

She is an avid bird-watcher, and also enjoys reading mysteries and crime fiction, summer concerts, and conventions.  She likes spending time in her garden, either planting flowers and herbs, relaxing with a good book, or playing with her dog.

Jen and her husband Jason have three kids… daughter Brittany, son Jack, and daughter-in-law Bobbie.  In April of 2022, Jen happily became a Mimi to grandson Jason Xavier.  She also considers her five birds and rescued lab-mix Winston a part of her family. 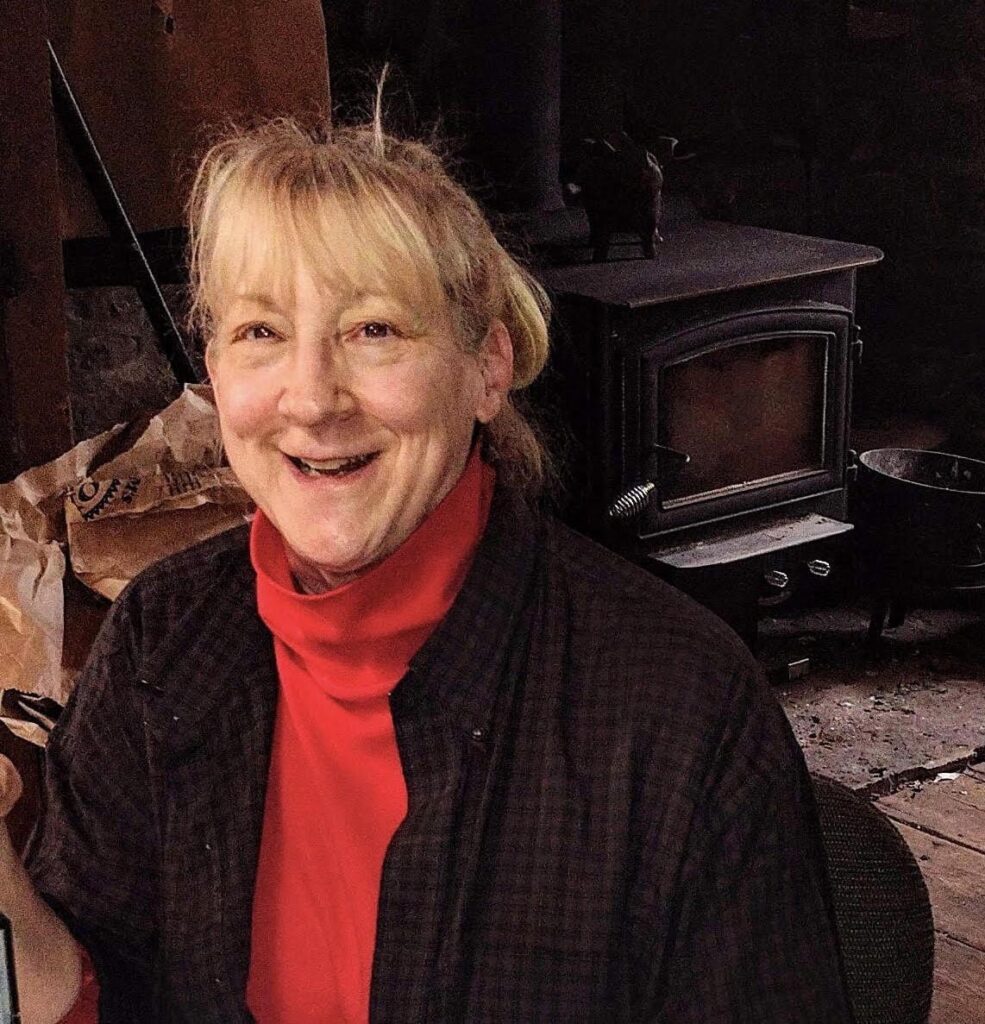 Elaine has been a bookkeeper for over 20 years, with three of those years keeping Ross Mill Farm up and running.  She is everybody’s favorite because she gives us our paychecks!

When not working, Elaine enjoys gardening, taking piano lessons, and playing handbells in her church.  Like Jen, she is an ardent bird-watcher, and is always on the lookout for that special bird visiting her birdfeeders.  At one point, she was visited by a Blue Bunting (and if you know birds, you know that is a pretty big deal!).

She has been married to her husband Lansing for 45 years.  And if you happen to see Elaine walking around town but think you’re seeing double, that just means she’s hanging out with her twin sister. 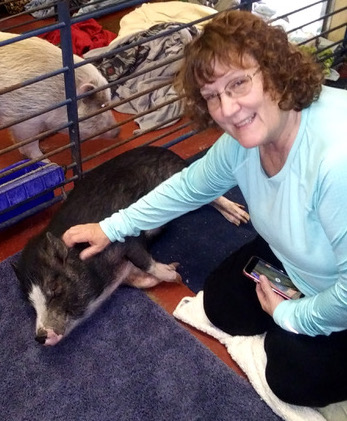 In 2007, Patti was blessed with an opportunity to take early retirement from “Corporate America” which afforded her the opportunity to work in animal welfare.  In January 2008 she arrived in Kanab Utah and began working at Best Friends’ Animal Sanctuary. It is there that she was first exposed to the amazing potbellied pigs of Piggy Paradise.  Having always been an animal lover….she knew what wonderful creatures they were…but had no idea how they would wrap themselves around her heart and become such an integral part of her life.

When she returned to Pennsylvania to be closer to her family, she really missed her piggy pals.  She was fortunate enough to be introduced to Susan Magidson at Ross Mill Farm. After the first day of volunteering, she was driving home thinking what a wonderful experience it had been and was determined to become a part of the Ross Mill Farm and Pig Placement Network family.  That was in September 2012.

Patti has been the adoption coordinator (and fill in “wherever” person) since then. 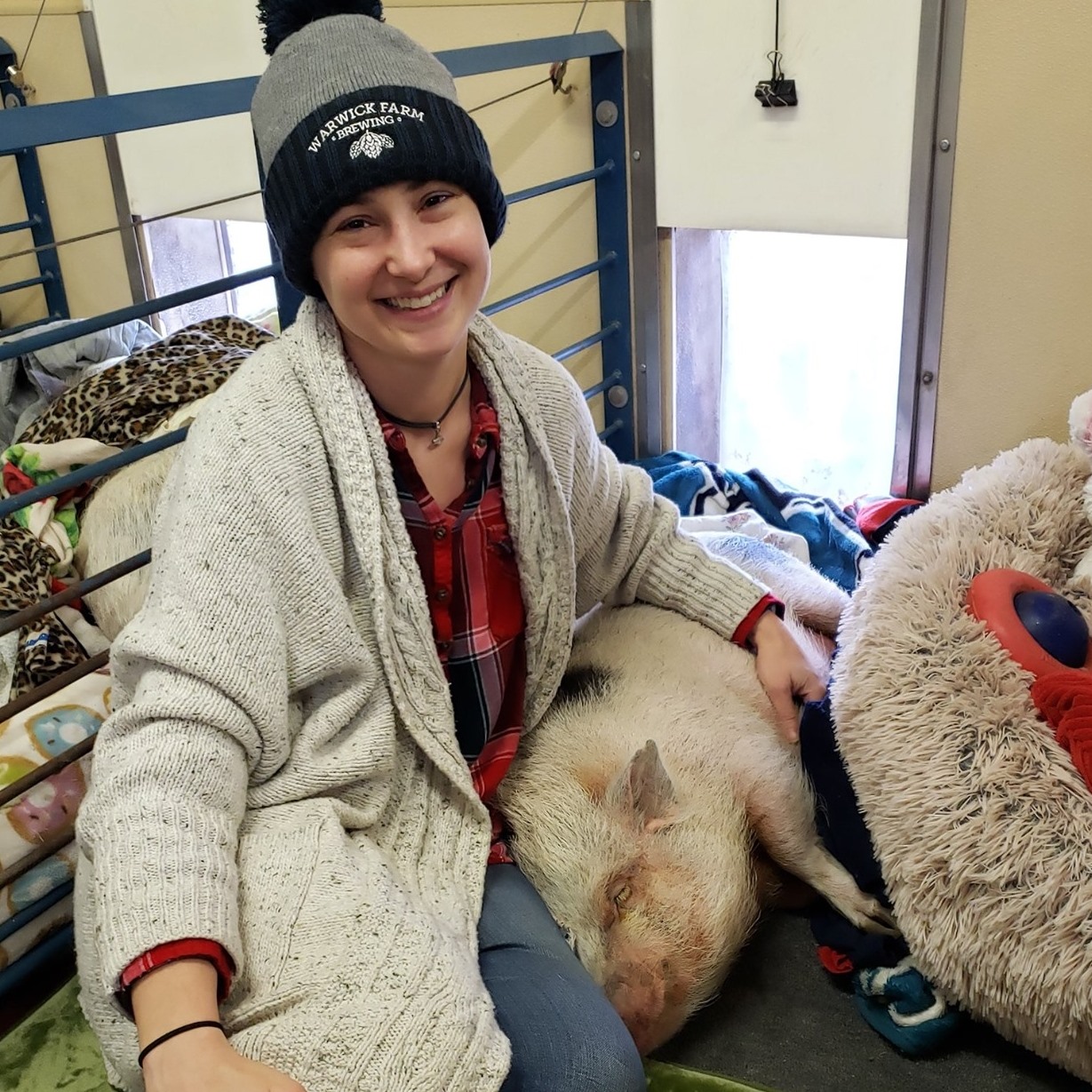 Kristen adores animals of all shapes & sizes and had previously volunteered for five years at Bunnies Urgently Needing Shelter while getting her Environmental Science degree in California. After moving back to Pennsylvania and working in office environments for 5 years, she missed working with animals and joined PPN in November 2019 as the Surrender Coordinator.

Some of her greatest passions are animals and plants, and she gets to embrace both at Ross Mill Farm.

She currently has a dog, a cat, and a rabbit, and she also enjoys Halloween, crafting, road trips, and gardening. 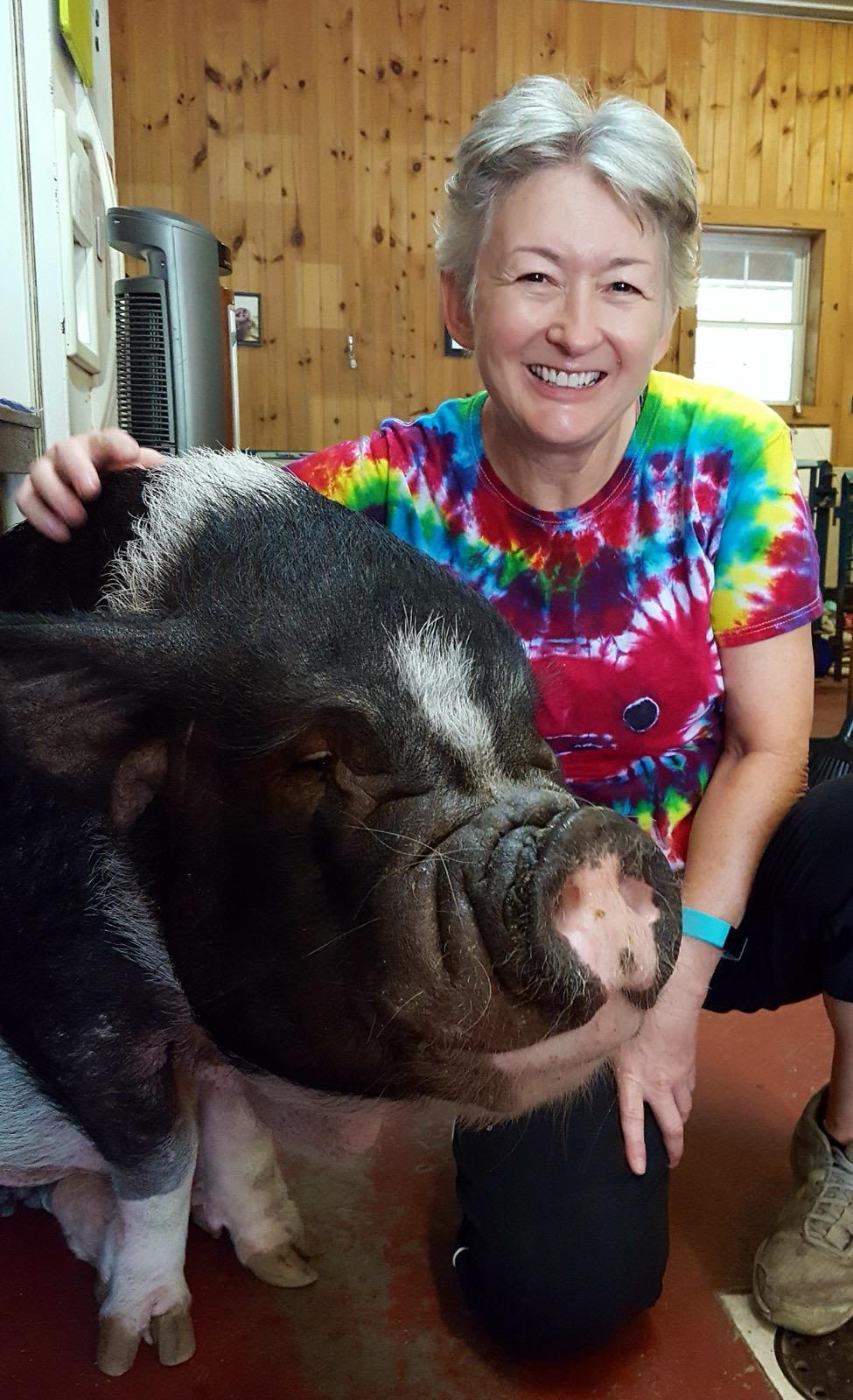 This is my third career after spending about 20 years as a registered nurse and 18 as a project manager for pharmaceutical clinical trials. I had never been around pigs before this job but I love all the personalities and mischief. My biggest wish is that people would do more research before adopting a pig so that I could be out of a job! 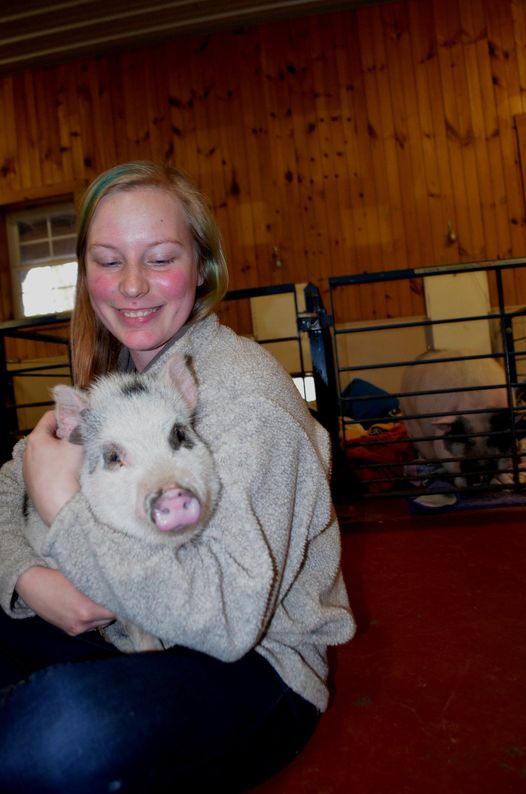 Angel started working at the farm after receiving her bachelor’s degree from Delaware Valley University in 2017. After working full-time for two years she changed her career path to preclinical research and now works in a laboratory setting but still comes on days off to spend time with her beloved piggies. She also performs hoof trims and assists the veterinarians at the farm. Angel hopes to one day own her own rescue. 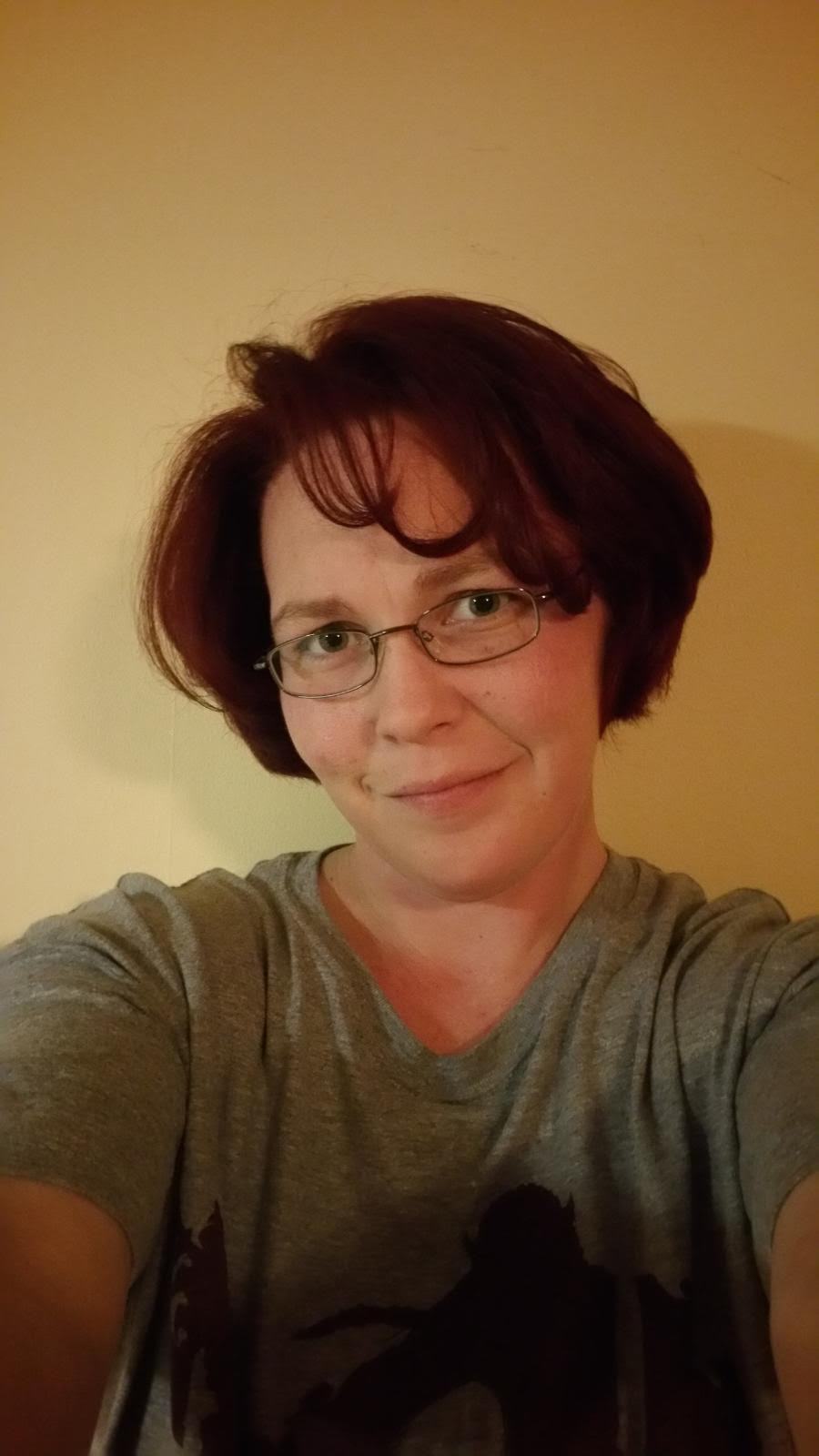 Michelle first contacted Susan 15 years ago when she got her first pig and was unaware of how to care for, at the time, such a small creature. A year later she adopted her second pig, and shortly after moved home to Pennsylvania, boarding her pigs at Ross Mill Farm until she could once again bring them home.

During the time of their stay, Michelle worked as a volunteer,  helping in the lodge to take care of the many PPN pigs and borders that made Ross Mill Farm their temporary home.

Eight years later she was finally in a house of her own and was able to bring her babies home. Michelle now works at the farm, has helped with multiple Piggypalooza events, and educates future pig parents on how to care for their new pet. 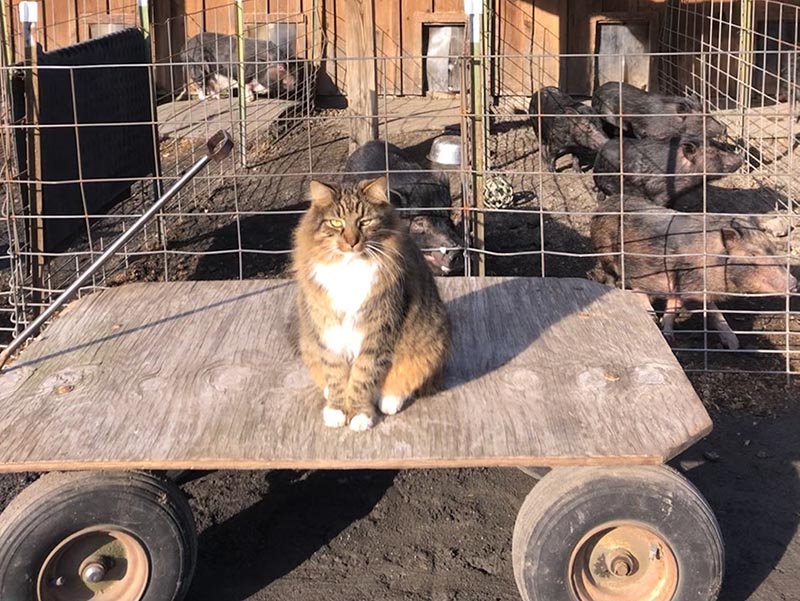 In his earlier years, after traveling the world by hopping cargo ships, JP spent his time living as an honorary member of Alpha Kappa Delta Phi at a school in South Carolina, where he was well known for being the only male ever to be initiated into a sorority. From there, he had a very brief stint in a family home where, unfortunately, there was not enough benadryl in the world for the residents of this household to take in order for JP to remain welcome. At that time, he heard that Ross Mill Farm was hiring and so, like the rolling stone that he is, he packed his bags and settled into life at the farm. Here he lovingly looks after the pigs and entertains them with the tales of his adventures as a sojourner and sorority sister. 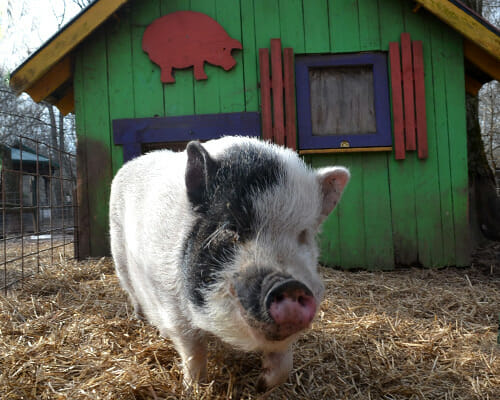 The Society for Advancement of Pet Pigs