Here, let’s have a bit of fun. Pig myths abound in the world of pets, and we’re here to set the record straight!

Fact: If someone told you that, they are lying or very misinformed. The average that we expect a pet pig to grow is 100 pounds. However, we do have some that top the scales closer to 250 lbs. A small potbelly pig would be closer to 80 lbs. Still, it’s important to realize that a mini pig is any pig that is under 300 pounds. That’s a big difference from the 35 pounds that some breeders will tell you to expect. 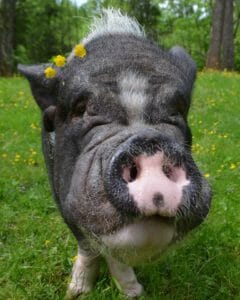 Some breeders will underfeed adult pigs in order to keep them small. This often leads to distorted growth, since the bones will not grow to normal size but the organs will. These pigs tend to die young. You should know what an emaciated pig looks like.

One of the other ways breeders trick you is by using piglets for breeding, and showing them off as the “adults.” While these pigs have reached sexual maturity, they are not actually adults. Pigs reach sexual maturity at around 6 months of age, but they won’t be full grown until 5 years old. That makes it pretty easy for breeders to confuse buyers about the true size of adult pigs, and can make it easy to trick new owners.

The demand for smaller and smaller pigs is big. At some point, there may well be a full-grown, 20-pound pig. However, that time is way off in the future and is not realistic for any pig you have now.

Myth 2: Pigs should be fat. 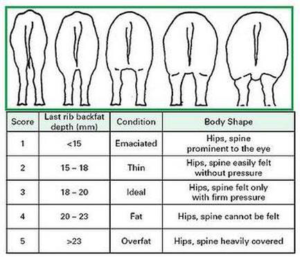 Fact: Pigs shouldn’t be fat any more than dogs should. Obesity causes problems for all animals, no matter the species. Pigs are very food-motivated and gain weight easily, so it’s simple for them to become overweight or obese. It’s not simple to get the weight off. Obesity can also cause issues like blindness and hearing issues, which can cause the pig to seem aggressive.

There are some pet pigs that will be larger. Kunekune’s are a larger breed, but are well known for their lovely dispositions. Other times, you’ll have a pig that simply grows much larger than others. There is a great deal of variability in the species. For that reason, you should go by what your pig needs. However, most (not all) potbelly pigs that are 200+ pounds are either overweight or obese. Check out this post if you think you need help dieting your pig.

Myth 3: Pigs can eat anything. 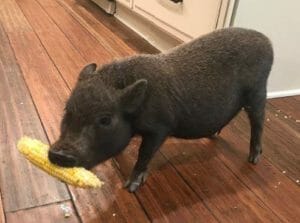 Fact: Things can be poisonous to pigs just like any other animal. And pet pigs do best when they eat a vegetarian diet consisting primarily of grains and leafy greens. They are opportunistic omnivores but don’t physically need anything from meat. Pigs will eat meat if the rest of their diet is lacking, but if your pig is well-fed and cared for, there’s no reason to give them any.

There also seems to be a lot of people who give their pigs dog food. Pigs do usually like it, but it’s very unhealthy for them. It doesn’t have the right nutrition for a pig. Remember, pigs are prey animals and are often grazers. Dogs are omnivores but still get a large portion of their dietary needs met with meat. Pigs simply don’t do as well with the same diet. 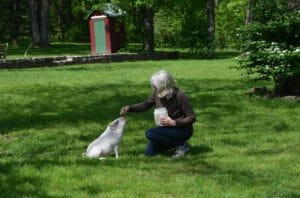 A piglet learning to sit

Fact: Pigs are the 4th smartest animal on the planet, putting them higher than dogs. This can be a wonderful thing. It means that pigs will almost potty-train themselves, have complex social interactions and hierarchy, and learn quickly. Their ability to learn so fast can actually cause an issue for some people. Their pet pigs can outsmart them!

And while pigs do need outside time, like any animal, they can be very happy living an indoor life. Just like a dog, it’s important that pigs get exercise and mental stimulation. If that’s taken care of, then pigs are more than happy to snuggle up and love you while you watch some TV.

Myth 5: Having a pig is just like having a dog. 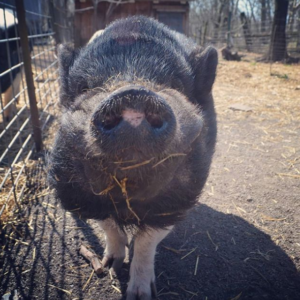 Nothing doggy about this pig!

Fact: Nope. Pigs are not dogs. If you have one for a few hours or a day, they may seem similar. However, the two are totally separate species and they “speak” wildly different languages. Pigs are prey animals and find safety in numbers. Dogs are predators and hunt in packs. They both like to be with others, but dogs may try to play with a pig, and the pig thinks it’s going to be eaten. The pig, scared, will either try to defend its self and possibly hurt the dog, or will run and the dog will give chase.

Humans, as predators, speak dog language more easily than we speak pig language. That means we really need to do some research so we can learn what our pet pigs are trying to say to us. Once we learn both languages, we can see how wildly different the two species are. 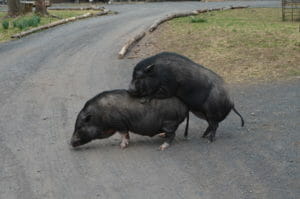 Female trying to attract a male

Fact: Alerting your pig, whether it’s a male or female, is an important step to take for their health. Many people will decide to neuter the males since it’s cheaper, but this is not an optimal decision. Females need to be spayed. Of course, it prevents litters, but it also prevents uterine tumors. Males aren’t going to get those, but they do get a certain, unpleasant odor.

Both sexes will be better off and more comfortable if they are altered. Males will start to emit a musky odor at a very young age, will grow longer tusks, and will be more adamant about escaping their pens to go find a sow. Females, on the other hand, become little demons when they’re in heat. They will take anything they can to make a nest, they become nippy, they will urinate all over the house to make their territory. Even if they were previously housebroken, a female sow in heat may start peeing in your home.

As you can imagine, everyone’s life is easier when you don’t have to worry about grumpy, smelly pigs who are always trying to escape. 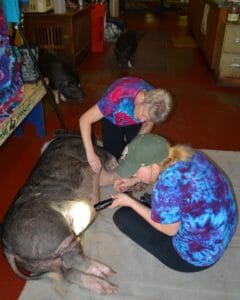 Fact: Pigs need yearly checkups at the very least. It’s important to have a vet nearby that can work with pigs because when they get sick, they get sick very quickly. As prey animals, they will never show you that they feel bad until they suddenly can’t get up out of bed. Routine vet care is vital to keeping your pig healthy, making sure they’re dewormed, vaccinated, and at a decent weight.

Since it’s incredibly easy for mini pigs to get overweight, a yearly checkup can really help that. A good pig vet will be able to look at the pig’s diet and let you know if it’s likely to cause problems down the road. But even if you know exactly what you’re doing with your pig’s feed, they have other needs. Hooves and tusks may need to be trimmed. Well, hooves definitely need to be trimmed and tusks may need to be, depending on their position and your personal preference. 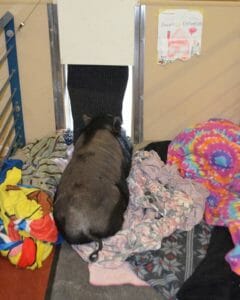 Fact: Pigs actually blow their coat every year! They don’t have fur, but their hair falls out by the handful. It can leave some of them looking a bit… haggard. Some pigs will blow their entire coat and look like shiny newborns, while others will lose patches and look a bit like if Kramer had a balding pattern like George Costanza. Either way, the hair will grow back. They just look a little different for a while!

Fact: This is an odd myth, but it does have some basis in truth. Pigs can and have died from snake venom. A snake bite always warrants a trip to the vet, especially if you aren’t sure what kind of snake it was or if the pig is showing signs of distress. With all that being said, however, pigs do have increased resistance to some kinds of venom. That does not mean that they aren’t susceptible at all or that they won’t react to whatever kind of snake they run into. If in doubt, always, always call your vet!

Myth 10: Pigs are dirty and smelly. 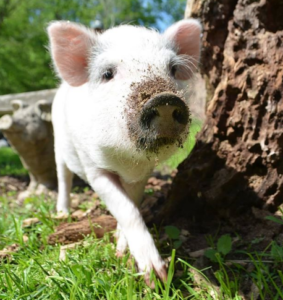 Fact: Pigs are cleaner than we are. That may sound weird to say since it’s not like pigs are running around with a vacuum! However, since pigs are prey animals, they want to keep their scent away from where they live. They will almost housetrain themselves and do so much faster than dogs do. Some of them do like to roll in the mud, but that’s because they’re susceptible to sunburn. Mud acts as a natural sunscreen. If you provide plenty of shade and maybe a shallow kiddie pool, lots of pigs will clean themselves off for you!

Julie Huff is happiest when writing about animals and the environment. She worked as a freelance ghostwriter for five years before accepting a position writing for Ross Mill Farm and as Surrender Coordinator for Pig Placement Network.