Is a Pet Pig Right for You?

Owning a pet of any kind is a major responsibility. As their caretaker, you take on the responsibility of keeping the animal in the best physical and mental health possible. That means money, time, and often, an emotional commitment. It also means researching to find out about this particular pet’s needs – which is what you’re doing here!

So if you’re interested in getting a pig but aren’t sure what to expect, there are a few things you need to do first. Before you even consider what you’re looking for in a pet, you need to call your local township and make sure that you are allowed to own a pig. Many areas have ordinances against pet pig ownership, so that is always, always step one.

Step two is finding a vet. Some veterinarians will see anyone or anything, but many won’t. You need to find a vet who is knowledgeable about pet pigs. If your veterinarian is good but not experienced with pigs, ask them if they have a colleague or someone they can consult with. Sometimes, knowing that your veterinarian has backup and is willing to learn can be enough. After all, pig experts aren’t born!

Why do You Want a Pet Pig? 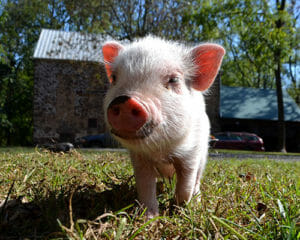 Are you getting it for someone else? If so, don’t do that. Animals are not a subscription you can cancel any time. It’s a big decision that has a dramatic impact on both the animal and the person. It shouldn’t be a surprise, it should be a decision that is made as a family, with everyone involved.

Do you want a pig because they’re popular? Pigs are cute and adorable when they’re babies. You see a lot of pictures of them on Instagram or YouTube, and those quick shots can make pigs look easy. Those are not a realistic interpretation of how pigs are. Puppies are all over Instagram as well, but everyone knows they poop in the house and chew your shoes. Unless you know what to expect from a piglet, you may end up with a spoiled pig who thinks they’re in charge of YOU! In other words, don’t get a pig because it’s trendy.

Are You Set Up for a Pig? 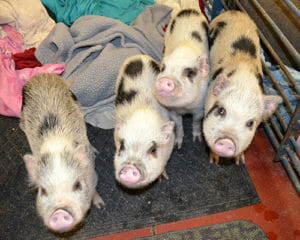 Pigs, again, are not dogs. They don’t do stairs, they don’t like to be held, and they don’t respond to affection as strongly. They need outside places that they can root up, so if you have a carefully manicured lawn, you may not want them to do that. It’s perfectly possible to get a pig who does not root as much, but that is a personality characteristic. If you have something specific like that in mind, it’s often better to adopt an adult pig than it is to get a piglet. The owner will be able to tell you which pigs like to root, and which ones aren’t as into it.

Another thing to keep in mind is the physical set-up of your home. Pigs cannot do the same things that we do, and the most common issue they encounter are stairs. Pigs can only see straight ahead and down. They cannot look up. A pig, no matter how much time it spends outside, will never see the sky.

Pigs aren’t fans of stairs. They won’t go up because they can’t see where they’re going. Pigs can often go up and down steps when they’re younger, but as they get older and bigger, it becomes increasingly difficult for them to do that. Their legs are quite small to hold up all their weight, and any issues like uneven or long hooves, being overweight, or having someone else going past them, can lead to a fall.

Others in the Home

Last, you have to think about the other creatures living in your home. Do you have children? Other adults? Do you have other pets? How would these animals and people react to the pig? If you have a small child who will be instinctively afraid of a pig if it charges, you need to take steps to make sure you set the child and the pig up for success. If you have dogs, you’ll have to learn about introducing your pig to them and why you should never, ever leave them alone together. 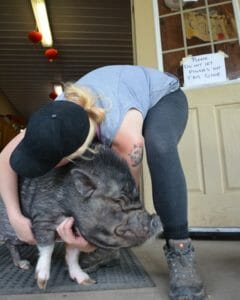 Not everyone who gets a pig actually wants one. Many people think that because their pig loves food if they give them the food the pig will love them.

That’s not really how pigs think. If you constantly give a pig food for no reason, then the pig will start to think of you as a kind of vending machine. And if they nudge you and you don’t give them food, well, gotta give the vending machine a good hit! Food should be closely monitored with pigs and used only for nutrition and training. Not just for fun.

Other people think that if they get a pig, it will come to them for attention similar to the way a dog does. It won’t. Pigs are affectionate animals and they do seek out human attention. However, they don’t want to be held or “thumped.” They do want to snuggle up with you after a long day and take a snooze while you watch TV. They want to flop over for belly rubs and will run up to you if you’ve been gone for a while. They’ll also leave if you scratch too hard, get too loud, or smell weird.

Who is a Pig Right For? 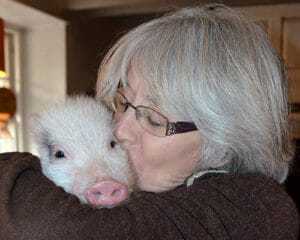 After all this naysaying, it would be easy to assume that no one should get a pet pig. That’s also not the case. Many, many people adore their pigs and would never be without them. They tend to be great pets for people who are allergic to most other animals. Remember, pigs have hair, not fur! They’re hypoallergenic, even if they do occasionally blow their coats!

Anyone who wants a pig can have one, as long as they have the right set-up and are allowed to have the pig. The biggest barriers are, of course, the ones outside of our control. Zoning and vet availability are HUGE factors. Everything else can be changed or learned.

So who can have a pig? Pretty much anyone who is allowed to and is willing to put in the work. If you’re willing to be a responsible pig owner, you can have one. Does that sound like you?