Pigs and Dogs: A Match Not Made in Heaven

By: Ross Mill Farm|Published on: May 24, 2019|Categories: Education, General|

An excerpt from Potbellied Pig Parenting by Nancy Shepard

Though Mother Nature may not have intended them to be the best of friends, [pigs and dogs] can become amiable roommates, with your help. 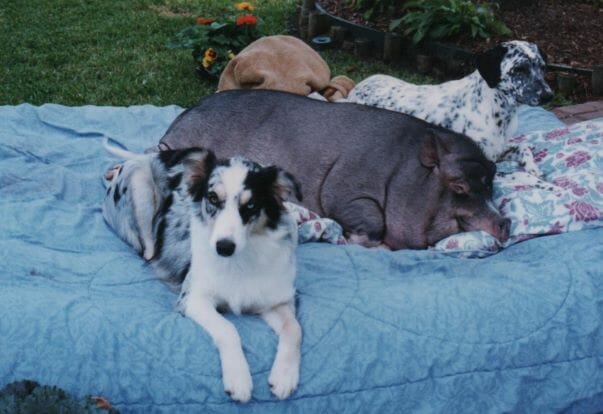 Pig and dogs relaxing together

A question I (Nancy Shepard) am frequently asked by prospective pet pig people is, “How do pigs and dogs get along?”

My response, based on my own experience, has always been, “Usually, fine.”

But a few incidents involving pet pigs and dogs…, have caused me to investigate the relationships we force on our pets in hopes of determining why some work better than others.

It’s true, pigs aren’t for just everyone – or their dog. Sometimes a pig has difficulty interacting with the family dog because the adoptive family [didn’t do] enough homework on the temperament and personality of pigs. The intelligence and ingenuity of pigs should never be underestimated. As an owner, you must be willing to take the time to understand how a pig’s mind works. Then, you have to teach your pig the rules that you feel are important in your household.

Winston Churchill once said “Dogs look up to you. Cats look down at you. But pigs treat you like an equal.”

Think about that when you invite your “equal” into your household.

Sometimes, proper introductions were not made between pigs and dogs. [It didn’t happen] in a controlled environment where the pig felt safe and secure, or the family exerted little or no control over its dog… The dog did not respond to “no,” when commanded not to bother the pig. I believe that if you cannot control your dog, you’ll not have a happy dog or a happy pig when the introduction is made. First impressions do count, so a strained initial meeting put the relationship off to a bad start.

As a newcomer, the pig should have her own space. Let your dog have nose contact with the pig through a safety gate. This is a way for the two to meet without the dog intruding on the pig’s space. Olfactory familiarization… is critical in the animal kingdom. A pig is curious by nature, so she will touch noses with the dog and snurddle around in its furry coat. At this point in the… process, use soft, praising phrases such as “Good dog. See what a nice piggy we have here. Be nice to the little piggy,” and vice versa for the pig. This sort of interaction several times a day for a few days allows for a gradual mutual acceptance.

When you feel the time is right and that the two pets have gained some trust and familiarity with each other, slowly allow the dog into the pig’s area, all the while using positive verbal reinforcement. It seems dogs simply cannot resist cute little piggy butts and most generally make a bee-line to that body area and sniff madly. Unfortunately, this is just something dogs do that pigs don’t like. If at all possible, try to prevent the dog from displaying this behavior. 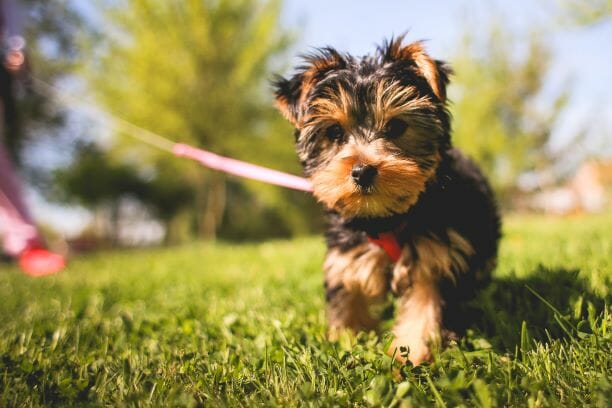 Now, if the situation gets out of control and a fight ensues, command your dog to “stop” and make him leave the room. Remember never to get your hands in the middle of a dog/pig confrontation. Use a chair or something rigid, like a serving tray, to break up the fight if the dog doesn’t listen to “no”. Another suggestion is to have the dog on a leash. This way you can forcibly remove your dog from contact with the pig. Even though this whole scene may be traumatic – for you, the dog, and the pig – don’t give up. It will take a while but eventually, the two pets will work it out with your help and supervision.

It’s only natural to expect some sort of confrontation when two animals meet for the first time. Even pigs who are born and raised together and then separated for a few, short weeks will fight to re-establish a pecking order when reunited. [Pigs and dogs are no different.]

In two cases which I’m familiar, the dog-pig introduction was a complete disaster.

The Scenario: Pig arrives. Dog sniffs pig’s privates. The dog does not respond to the owner’s commands to “Leave the pig alone.” Pig gets mad. Owner tries to comfort pig by petting the pig around the face while the dog is still sniffing behind, though the pig can’t see him. The pig, thinking the unpleasant action at her rear is somehow related to the action at the front, nips at her owner’s hands. The pig responded thusly because she translated the unpleasant behavior from the dog to the hands that were, in effect, preventing her from retaliating.

In another case, however, it took a month of intensive work, a trip to the vet, who tested his psychotherapy skills, my help as the breeder, and the patience and understanding of the owners to get the pig back to her normal, sweet self. It was quite a chore. Sweet Pansy Pig [became] the Psycho Pig from Hell after her encounter with an unfamiliar dog at the family’s lake home.

Upon hearing of Pansy’s dreadful experience and the resulting behavior, human hand nipping, I first suggested we take her to the veterinarian to rule out any physical or medical problem. The vet could find nothing organically wrong with her, so together we worked out a therapy regimen that involved touching Pansy while she was eating – but only on her back and belly and not around the face. She was also not allowed as many food treats and time in the house as she had been accustomed. We built her a rooting box, so her time alone would be rewarding and [entertaining]. When she nipped, her owners pushed her head to the side while speaking the words “no bite” and she was put in time out to show her what was unacceptable behavior. Her progress was slow but steady and her return to being a loving pig was eventually complete. 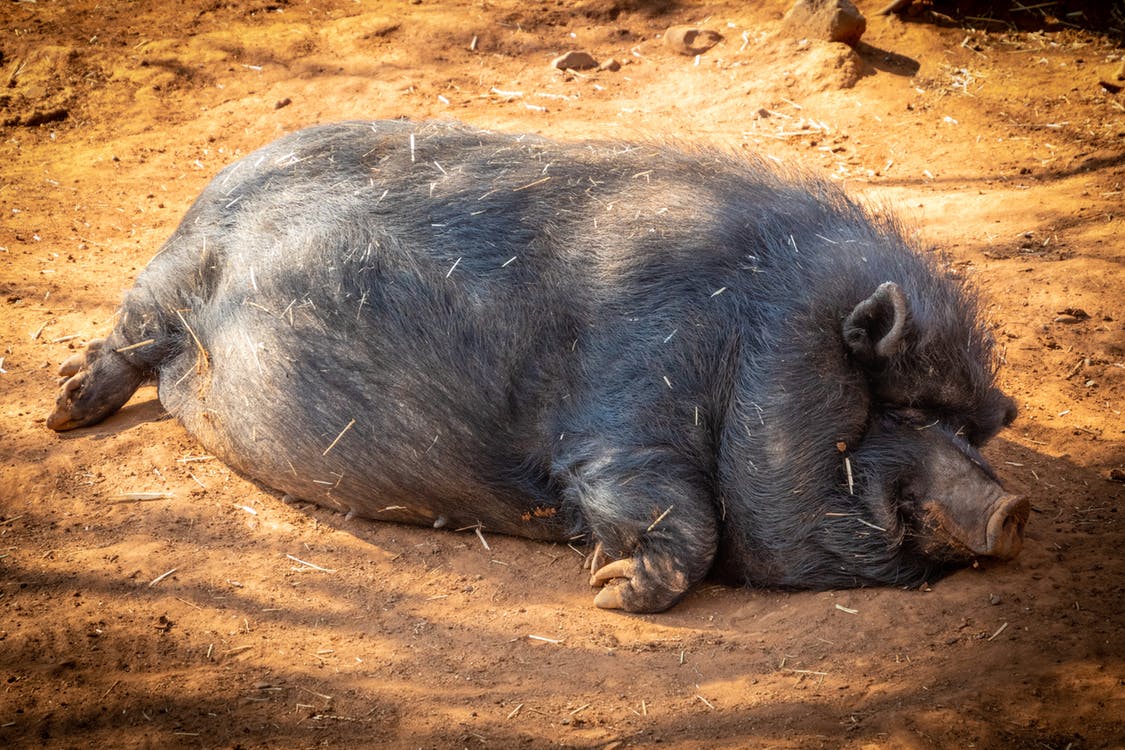 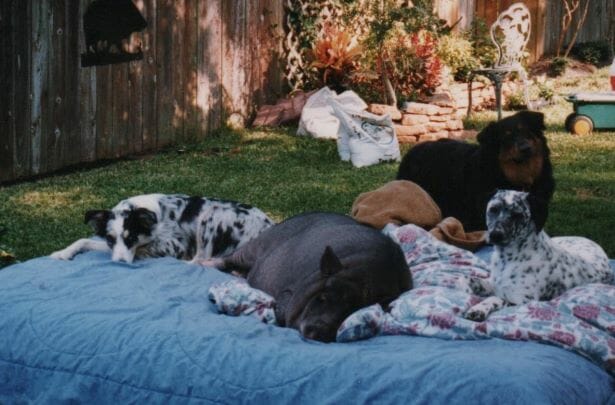 Bad behaviors in both pigs and dogs are certainly difficult to reverse. It’s far better to take the time and steps necessary to ensure a positive meeting of the canine/porcine minds. I don’t think it’s really fair to let a new pig come into a domain of an already established pet and simply take over. But I feel it makes a lot of sense to work out an agreement where both pets feel comfortable and unthreatened. The dog should already know his boundaries and should be obedient. If [he is not], then this canine problem should [have a solution] before adding the complications of a porcine pal.

Bedford, a pet pig who lives with Ondine, a huge Newfoundland, never had one problem adjusting to his new canine housemate. His owner once told me this story:

Every morning, Bedford wakes up the dog, so the dog, who is tall and can reach the bed, wakes up the owner to let them both outside for their morning constitutional. Here is a definite case of harmony between the two species, each working for the benefit of both.

I certainly don’t have all the answers regarding pig and dog relationships, but I hope that by sharing some experience of pigs who were adopted into canine-shared homes, I can help spare you from such unpleasant situations. It’s your responsibility to assure that the “getting to know you” process gets off to the best possible start.

A Caution about Pigs and Dogs

It’s best not to leave your dog and pig together unattended, even if they have become the best of pals. There [are] reported cases of dogs in the same household unexplainably attacking the family pig. The dog could permanently damage the pig or even kill them. Remember, a dog is a predator while a pig is an animal who is preyed upon.

If your pig has an outside pen, make sure that the fencing is tall enough to prevent roaming dogs other wild critters from entering.