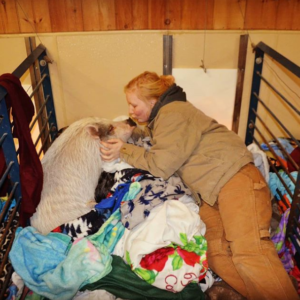 Ross Mill Farm works with pet pigs on a daily basis. We are often surprised by the number of people who come to us with a pig that has never seen a vet. This is not acceptable – pet pigs need vet care just as much as dogs and cats do.

First and foremost, all pigs need to see a vet in order to be altered. Altering means spaying or neutering an animal. This is incredibly important for a number of reasons, but the most obvious is that pigs reproduce FAST.

Pigs can have litters at an incredibly young age. When a sow has piglets, unneutered males can get the female adult pregnant at only a few weeks old – often before they’ve found new homes. This is bad. For starters, the sow is probably the mother and this kind of close lineage can produce defective piglets. Breeding pairs should be at least four generations apart to ensure a healthy line.

Second, those piglets were probably unexpected. Now the owner has to deal with the issue of having even more pigs than they had originally planned for. A huge percentage of mini pigs are rehomed during their first year, and these unexpected litters only add to the problem.

Third, males and females both behave better after they’ve been altered. Males also smell a lot better! All pigs have scent glands. Unless they’re neutered, boars release scents that are less than comfortable inside the home. They’ll make your nose hairs curls. They’ll be much more likely to try and run away, will try to hump pretty much anything around, and will constantly try to assert their dominance.

Females, on the other hand, become even worse than males. When females go into heat, they will gather up anything they can move and try to turn it into a nest – whether you’re wearing it or not. They, too, will try to run away to find a mate, and will also try to become dominant over you, your kids, and any pets in the house. Unaltered females are also better known for biting whenever they smell food, peeing all over the house, and trying to mount anything and anyone they can knock over.. This can make them unpredictable around small children, and generally makes them poor houseguests.

Despite all of these issues though, some people still don’t want to alter their pet pigs. Of course, the cost can be substantial, but it’s something that you should be prepared for when you get a pig. If you have an animal, you have a responsibility to care for it properly. Regular vet visits and preventative care is part of that. If you don’t think you can afford to get your pig spayed or neutered, consider adopting one that already is.

Pigs need regular vet care as well. Like most animals, they will need vaccines. Even if it isn’t with other pigs, that doesn’t mean that other animals aren’t around, or that your pig will never get out. If that were to happen, you’d feel much better knowing they’re already vaccinated.

Pet pigs also need deworming. This is usually done about every 6 months and is important to make sure they’re getting proper nutrition. Plus, worms are gross to have in your intestines. You don’t want your pet to have to suffer through that.

Lastly, pigs need tusk and hoof trims. Not all pigs will grow tusks, but they can. You don’t have to have them trimmed, but many people do because it can prevent them from getting stuck on things. If your pig snurfs their way into a bush and tries to back out, they can get their tusks caught. Usually, this results in a lot of screaming and thrashing, so some owners may want to keep them trimmed down.

Hoof trims, however, are a requirement for all pigs. Hooves that get too long can impede a pig’s ability to walk, which eventually leads to joint and leg damage. Pigs with bad hooves are not happy pigs, so if you can’t do it yourself, then your pig must go to the vet at least once or twice a year.

Keeping a pet – any pet – means that you take on the responsibility of their health and wellbeing. Keeping these guys healthy and happy takes a lot of work, but the rewards are innumerable. Give them a loving home, and they’ll give you all the love you could possibly imagine. 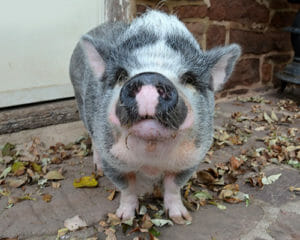 A friend for life