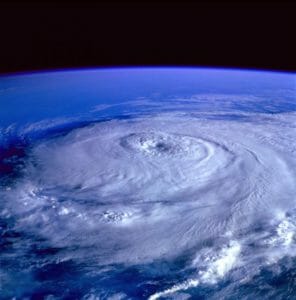 In September of 2017, Hurricane Maria slammed full-force into Puerto Rico. The Category 5 storm wrecked devastation all over the island, destroying homes and businesses, wiping out the power grid, and killing thousands of people. With winds reaching as much as 175 mph, most buildings didn’t stand a chance. Downed trees, flooded cities, and damaged infrastructure turned a terrible storm into years of ruin.

The people were hurt. When you don’t have a job, water, or a home to live in, it’s awfully hard to try and care for your animals. But there’s little to no aid set up for them. The animal rescues that worked on Dead Dog Beach to try and dent an out-of-control stray population before the storm had nothing left to give after.

Hurricane Maria caused Puerto Rico’s stray problem to become a crisis, and pigs are among those in need. 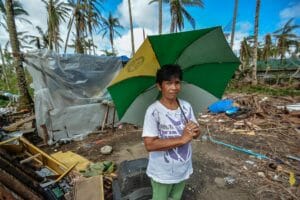 Woman in front of wreckage

One of the reasons pigs are so prevalent in Puerto Rico is because the culture surrounding spay and neuter operations is dicey. Although Puerto Rico is a US territory, its culture is strongly associated with the rest of Latin America. This is where the machismo culture runs strong. Because of this, many men in Puerto Rico feel that they can’t neuter their male animals because it’s an assault on their maleness. Of course, when those men then lost their homes in the hurricane and had no way to care for their animals, they abandoned them fully intact.

Along with the cultural aspect, there are other issues that are impacting the stray population. One of the biggest ones is that the government has some pretty intense restrictions on veterinarians. Mostly, they have to board certified AND they have to have gotten their DVM from a school in Puerto Rico. Well, now there isn’t one. And any vet who was in the territory before the storm hit can still practice there if they haven’t left for the mainland. Most of them, like most everyone else, already have.

However, without being able to call in aid, strays have no one to help them. Rescues in Puerto Rico have even fewer resources to help them manage the animals now, and few people are stepping in to help. It’s a complex problem that’s only gotten worse with more severe natural disasters. We’ve already seen once what happens when the animals are left to fend for themselves – they start to destroy what’s left of farmer’s livelihoods.

More than Dogs and Cats

Now, in Puerto Rico, stray cats and dogs aren’t the only problems. Livestock are loose all over the area as well, many abandoned by their owners after Hurricane Maria. Horses run wild, their brands clearly visible but with no owners in sight. There’s also a booming population of potbelly pigs. 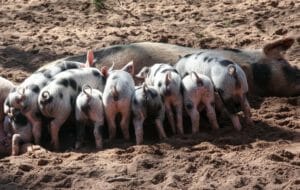 Anyone who knows pigs knows how quickly they can reproduce. Females can get pregnant very young, but males can breed even younger. Each female can have a litter of 4-10 piglets, and they can get pregnant again shortly after giving birth. This high reproduction rate is a large part of why the feral swine population is quickly getting out of hand.

Pigs are also destructive when they aren’t properly kept. They till up the land, get into fights, and eat anything they can. Sometimes, that can even include smaller livestock. Pigs are omnivores, after all. Any farmer from Texas can tell you the kind of damage feral swine can do to farmland, and Puerto Rico is no exception.

There are several organizations that are dedicated to working on controlling the stray population in Puerto Rico. Some of these have set up various fundraising opportunities to help control the stray populations of animals. They want to make sure that packs of wild dogs don’t get hungry enough to start turning on the livestock, further depleting the local resources.

People were fleeing the island before Hurricane Maria because of the economy. Now, those efforts have redoubled. When people leave the island, they rarely take their animals with them. So the rescues that are still trying to scrape themselves together after the hurricane are left to try and help those that are left homeless.

Like many things with Puerto Rico, this story hasn’t been prominent in the news. It’s hard to find stories about the stray pig population. But what we can find are videos posted to YouTube from individuals and small organizations. It’s grassroots efforts that have saved some of these animals and gotten the word out. It’s grassroots efforts that can change the laws and make a difference in the lives of these animals.

If we all pitch in, we can make a difference.