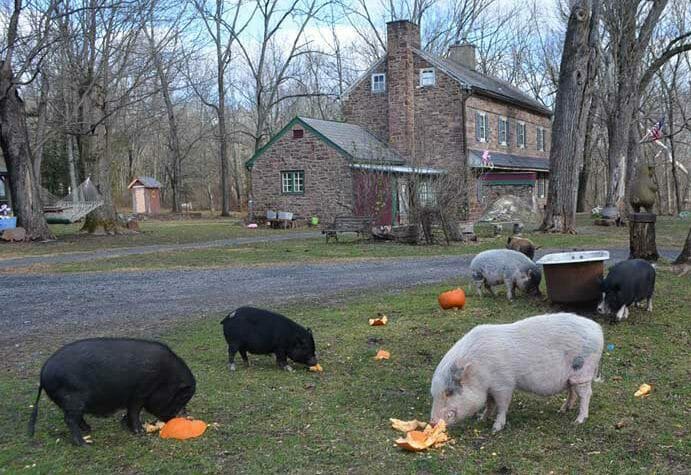 It’s a brisk, sunny Saturday in early December, and there’s a mad dash to the entrance of Ross Mill Farm.

Beyond the entrance gate, a group of kids ranging in age from about 7 to mid-teens rush past their parents and stop abruptly in front of two large potbellied pigs ready to greet them. Inching closer, two girls cooing in unison kneel down to pet them. Another kid darts off in another direction toward a pint-size spotted piglet wagging its tail in delight.

The rest of the group files into a large wooden lodge housing dozens of pigs. Some are in fenced cubicles, snuggled warmly under blankets. Others roam freely to greet families strolling about. One of the kids pulls out an iPhone and begins to Snapchat an interaction with a pig licking her hand. Squeals and high-pitched laughter abound.

These sights and sounds are familiar to Ross Mill Farm owner Susan Armstrong Magidson, who has opened the facility from noon into the evening on this Saturday for a holiday open house. “We’re generally open from 12 to 3 p.m. every day, but I thought it would be nice to host a holiday open house to invite families, people, out to meet our pigs and really just kick back and have a good time,” Magidson says.

Families from far and wide have come to the Bucks County farm, about an hour north of Philadelphia, to meet new piggy pals, mingle with fellow pig lovers, and potentially to adopt. “Pigs are genuinely friendly creatures,” Magidson says. “The potbellied pig is like a 3-year-old: very intelligent but really self-centered. You have to provide it with lots of care.”

For Magidson, pig breeding and boarding started out as a hobby. She and her husband were marketing consultants in New York City. In the early ’90s they purchased Ross Mill, which dates back to 1740, as a retreat from manic city life. Starting off as a small “gentleman farm” with just a few chickens, goats, and pigs, Magidson took an especial liking to breeding and raising pigs. By 1992, she and her husband retired from their cushy jobs and moved to the farm full time to provide services for their bevy of pigs. By then, they had already begun rescuing pigs that were left abandoned by farms and in desperate need of shelter. Magidson then started a pig-rearing club and became president of the national organization.

Today, Ross Mill Farm and its crew of 10 employees not only support the rescue of pigs, foster care, and adoption, but also short- and long-term boarding. “I found that those looking to go on a short vacation, or no longer wanted to care for their pig, needed boarding,” says Magidson over the phone some days later.

In addition, the farm provides pet pig consultation, veterinary care, transportation and concierge services (Magidson and her crew provides door-to-door pickup for pigs), in-house food manufacturing, spa services (including “pigticians” for grooming and and massage therapy), and more. (A word to the wise: pigs love being massaged.) Magidson even sells specially made pig harnesses without sharp edges that avoid chafing.

It’s easy to see how a pig lover could be seduced into dreams of porcine adoption. Magidson doesn’t discourage the concept, but she advises, “The holidays aren’t a good time to introduce a pig during the height of an activity. It can create a lot of chaos. Adoption shouldn’t be a surprise or a gift. There’s a process to incorporating a pig or piglet into your family dynamic.”

Magidson says that she sees an influx of unwanted pets in January. “Parents will surprise their kid with a pet. The kid might not be happy with it, or it takes up too much responsibility with it and then decide to re-shelter it.”

However, if someone is serious about adopting a pig, Magidson says the first step is asking yourself some real questions. “It’s an obligation to adopt any pet, specifically a pig. You have to think: Do I really want to do this? Can I actually provide a home for it? Once you come to an answer, then you can proceed.”