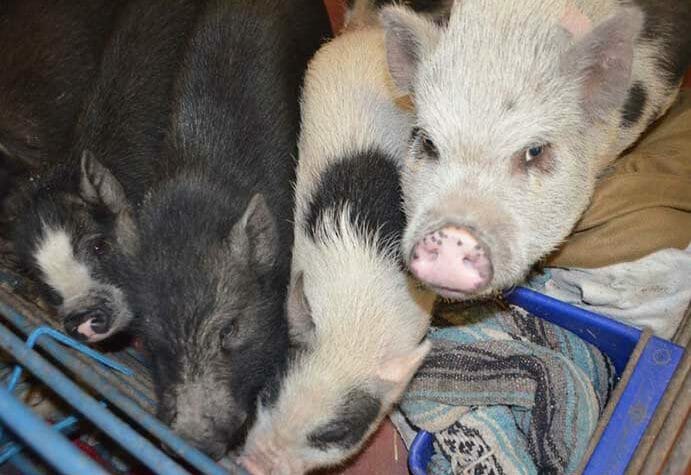 I have raised and cared for pet pigs for over 25 years, I have never before seen such irresponsibility with the lack of science in pet pig breeding practices. Just today, I learned of an 8 month old that died from dwarfism, an 18 month old that needs major surgery to correct a genetic defect and of a 5 month old that needs a new home because it has already doubled the size “guaranteed” by the breeder. Did that same breeder guarantee the life expectancy or the disposition or the personality?

It saddens me when I see the lack of respect for the pig as a pet or the unsuspecting pig owner, when uneducated breeders condone and allow mating an intact male with an un-spayed female; just because they can reproduce doesn’t mean they should propagate. So many of today’s pigs that are indiscriminately bred should never reproduce because they are genetically inferior. That is why we are seeing so many tragic and sad deaths occurring to pet pigs before they reach maturity, let alone live out their life expectancy.

Unfortunately, the breeders are not around to see the harmful effects of their indiscriminate breeding. It is the unsuspecting new pet owners that must bear the sadness of living with or losing their pet that has these genetic defects. These pet owners are devastated after they have grown to love their new pet and then learn they bought a genetically inferior pig.

There is a science to breeding genetically sound offspring. In the wild it is called survival of the fittest. Animal production controlled by humans should avoid causing harm by introducing genetically inferior offspring. To accomplish this ‘do no harm breeding’ requires the breeder to understand and track the ancestry of the pigs being bred. This is essential if we are to eliminate breed flaws and encourage good traits. There is a science to it and breeders today are not breeding with science. They don’t track the pedigree. They must be doing it for its lucrative benefits or from an ill-informed love of the pigs. Forgive them Lord for they know not what they are doing… Literally.