The aggressive pig has become a real problem for many pig owners. Seldom does a week go by that I don’t get a call asking for help with a biting pig. Although my method has lasting success, the longer the behavior goes on, the harder and longer it takes to stop. Aggressive behavior should not be tolerated in house pigs.

Generally, the pigs that bite are the mistreated or abused pigs that bite out of fear or, more commonly, the pig that has not been taught the order of command in the house. Just as with people, some pigs are more dominant than others and all pigs will try to establish dominance over something if given the right situations. If your pig happens to be the dominant type and few, if any, rules, he may begin to display aggressive behaviors. 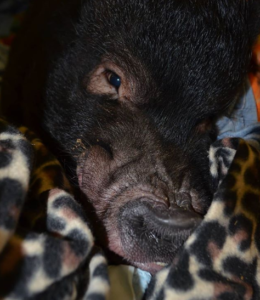 Most people who call think they have established rules in the house because their pig knows the meaning of “No.” They also think because they can pet their pig that the pig can be handled. Then, by asking a few more questions I come to find out there are rules in the house – but the pig sets most of them. I also find that their pig can be pet, but only when he chooses. He cannot be moved around or picked up unless he is continually fed to keep him quiet. And “No” means “not while someone is watching” and he probably hears it twenty times a day.

If the pig becomes too much of a bother, he is locked away. This is especially true when there are visitors “just for safety’s sake.” I find that there is litter positive interaction with the owner and that the pig is not taught to interact with people outside the immediate family. Just like children, pigs will test authority and must be taught how to get along in their environment. This takes a little time and effort, but owning a pet is a commitment and one that must be taken quite seriously. 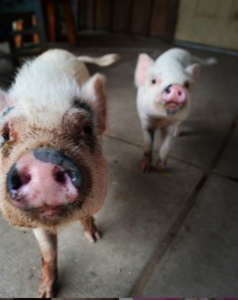 Six months to one year is commonly when a pig begins to test the waters and take over the household, but it can happen at any age. Pigs are not happy until they know their place in the household hierarchy and will challenge other family members (including pets) to establish their place. Often strangers in their house are a target; the pig senses fear and so he becomes more aggressive.

With family members, the pig will often start with the person who appears to be the weakest and most afraid, then work his way up. The most important part of stopping aggressive behavior is overcoming all fear of the pig. About 75% of the problem is that some family member is afraid of the pig, which only adds to the pig’s determination to dominate. Standing up to the pig will greatly reduce his advances. Most pigs start backing off without any correction. [Squeeze boards can be an effective method to help retrain the pig and keep the people safe.]

Pigs are highly intelligent animals and will only engage in a fight if they are confident they will win. In nature, pigs will test other drift (family) members a little at a time, then watch to see what happens. If their rival shows fear or weakness, he knows he has won and becomes more aggressive. On the other hand, if the rival does nothing, he continues to test until there is a reaction and the dominance issue is resolves.

There are several methods people have used to correct the aggressive pig. Squirt bottles, whips, newspapers, etc. If one of these methods has worked for you, great, but the problem is that you don’t always have these things immediately available and the pig can quickly learn when the tool is with you and when it’s not.

Corrections on aggressive pigs must be done immediately to be effective. You can’t be running across the room to pick up your tool – it’s too late. Yelling “NO!” at your pig is not a good idea either. An aggressive action needs more than a verbal reprimand and “No” has probably lost some of its effectiveness in every day living.

Other Problems with Sound

It makes the pig fearful of anything loud

There is an implication that only loud commands have meaning

It frightens guests or relatives enough to make them afraid of your pig. 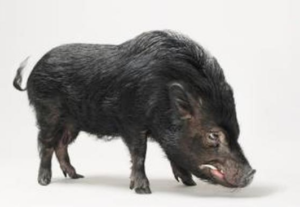 Standing very still with the head very low (always done before biting, if only for a split second)

Snapping in the air

Lunges, nips very close to rival, then jumps back