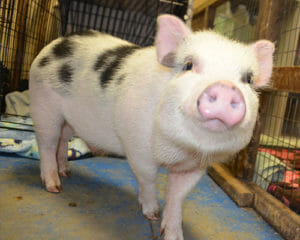 Pigs understand physical correction very well. After all, this is how they naturally establish dominance between each other. The correction described below has been used with great and lasting success. The correction is not an overnight miracle cure, it takes time, consistency and effort – but it will work to correct a pig’s aggressive behavior.
During the first week of corrections, it’s possible that your pig’s aggressive behavior may even get worse. You’re taking away privileges he has enjoyed. The corrections also require you to work positively with your pig, learning to handle and control him. It’s designed to teach your pig not to bite yet it doesn’t hurt, frighten, or make him hand shy. You must never lose when making the correction, and if you get into a fight with the pig, you are doing something wrong. 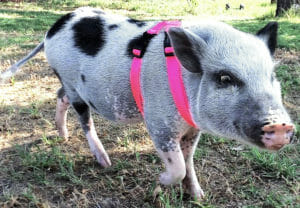 First, get your pig comfortable with you gently holding his mouth closed. Try and do this while petting your pig. Next, get your pig comfortable with you moving him a few inches while holding his mouth closed. Once he’s comfortable, you are ready to use the correction.
It’s important that the first few times you make the correction, you are fully prepared. The correction must be done without hesitation. You cannot chase the pig around the room, this only frightens him and he forgets why you’re chasing him. You also have to learn not to pull back with pig snaps.
Pulling back shows fear that the pig will sense and the correction will be much less effective. The hardest part of this correction is teaching yourself to grab your pig’s mouth and not pull away. To make sure you’re prepared for the correction, it’s best to try to set the pig up.
Place a harness on your pig to help with controlling him. Put the pig in a situation that causes him to nip. When the behavior happens, correct it. Remember to make the correction each and every time the pig displays any aggressive behavior. Don’t wait for the pig to snap. If you see if coming, correct him immediately. Learn to recognize the signs of aggression.

When your pig makes any aggressive action, quickly grab your pig’s mouth and hold it closed. Don’t let him swing his head or run away. Hold his head for two or three seconds, firmly say “No,” and release. At first, the correction is very short to ensure a victory for you and to avoid a huge wrestling match with your pig. You are controlling the pig, you are not trying to frighten or harm him.
After correcting the pig’s aggressive behavior, continue on as if nothing happened. It may take a little practice to catch the pig before he runs off or to avoid the pig biting you, but you can master this in a short time. If you feel concerned about your pig biting, you can wear leather gloves at first, but remember that you may not have the gloves available all the time. Repeat holding the pig’s mouth closed for two to three seconds each time he displays any aggression until he becomes comfortable with the handling (about four to six times.)

Now you must increase the severity of the discipline each time you make the correction. Add about one second with each correction until you reach 15 seconds. Remember, if you’re fighting the pig, you’re probably proceeding too fast. You must remain calm and in total control. 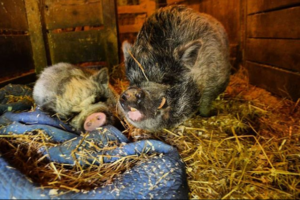 Once you have reached fifteen seconds, it is time to get more physical. Lift the pig off his front feet while holding his mouth closed for five seconds. There are three easy ways to do this:

With the pig’s front feet off the ground, drive him backward about a foot. With each correction, drive him back a little further until you push him across the room and into a corner, a wall or a piece of furniture.  Show no emotion. If you have a larger pig that you can’t lift off his front feet, drive him backward on all four feet. Lifting the front feet off the ground is best and even with a 100-pound pig you only need to lift his front end, or about 50 pounds. You can see this correction if you have HOGGIN’s video, “Amazing Pig Tricks,” in the intermediate section where the pig breaks “sit-stay.”

The next step requires some preliminary training. You must teach the pig to sit physically and not lead them with a piece of food. This “sit” is also shown in the training video “Amazing Pig Tricks” in the intermediate section. You should also teach your pig “stay.” A pig that will stay when told truly respects you.
For very aggressive pigs, this forced “sit and stay is very important to teach. The training also gives the pig positive time with you, not just negative experiences. Once your pig has mastered sit, drive te pig across the room and physically place him in the sit position, hold for about five seconds. Sho no emotion, When your pig knows stay, leave him on stay starting from ten seconds up to one minute. Remember to always release the pig from sit/stay. Do not let him wander off on his own.

The correction could take four to five weeks depending on these factors:

You must be consistent and always follow through with the appropriate degree of correction necessary to cure your pig’s aggressive behavior. All that you’re doing is calmly and unemotionally teaching your pig, in his own language, that he does not hold the dominant position in the household. 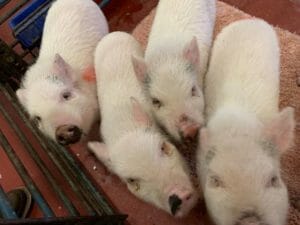 Because of a pig’s aggressive behavior, many people want to find a new home, shelter or rescue for their pig. Placing a pig in a new home is very difficult and placing a biting pig may be impossible. Many problem pigs placed in shelters or rescues are never adopted and are either euthanized or condemned to live their lives in outside pens, only getting attention when fed. It’s a harsh experience for a once-loved and pampered pet. The correction described in this article has saved many pigs from getting locked away, sent away or euthanized.

It’s your pet, your responsibility, your choice.

Make the right one.